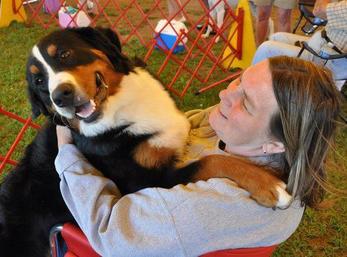 Our family  currently resides in Wethersfield, Connecticut where Mikie and John Mark attended the Agriculture Program at Glastonbury High School in Glastonbury, CT. We have been showing and training our Great Danes since 2005 but we are not from a "dog show family". We are members of Great Dane Club of America, Great Dane Club of Oxford and Associate Member of the Windham County KC. Here at America's Great Danes, we fully health test all of our breeding stock because health and temperament are our top priority.

Mikie has been handling Danes since she was 12 years old and presently 28 years old. Mikie finished "Ben" from the Open Fawn class by winning WD/BW (5 point major) at the GDCO 2019 PM Specialty show 1/26/19 under breeder-judge: Christoper O'Connell! Currently, Mikie is handling three Great Dane puppies from our Levi x Abbie litter. You can learn more about her by clicking "Mikie" page.

At the age of 13, John Mark started his love of handling in October 2009 and is  currently 25 years old.  He is presently part of the, "Dream Team". John Mark entered the Team in 2010 with one of our other bitch, "Emily" BRF's America's Hope and also was a co-owner of Beth Brock's flat coat retriever "Wallace" who he showed in Juniors at the time.  Then, he handled "Lily" GCH BRF's America's Ray of Sunshine in Juniors and Breed. Since he aged out of Junior Showmanship in October 2014, he has been showing "Abbie", America's Let Freedom Ring in the Bred By class. During the 2014 GDCA National, John Mark and "Abbie" placed 2nd in a very competitive Bred By class. On April 19th, 2015, John Mark handled "Abbie" to WB/BW (Major) to FINISH from the Bred By class under judge: Dr. Louis Bond! This is a very special win because she is our first Homebred Champion and Lily's first Champion. Abbie will be specialed in the BOB ring by both John Mark and Mikie!

Due to Mikie's knee injury, in February 2012, John Mark showed Lily in Breed for her and showed in Juniors. On 8/18/12, John Mark won WB for 1 point which finished Lily's AKC title! Together, Mikie and John Mark finished Lily's GCH title on 8/18/13! John Mark has put Lily's second, 3 point Specialty Major at Trenton, KC in May 2012 and 3 additional single points. John Mark finished Junior Showmanship in 2012 as the #6 Nationwide with Great Danes, #1 in the Northeast, and #29 in the Working Group out of Top 30 in Juniors.

The first person to help teach John Mark and Mikie to show dogs was Beth Brock (Handles Flat Coat Retrievers and a good friend), our handling class instructor when we purchased our first Great Dane, "Emily" BRF's America's Hope from BRF Great Danes from 2005-2007. Mikie showed in UKC first with "Buddy" Maitau's America's Dream and then later handled in AKC. The second person to help teach them how to show was our Great Dane Breeders, Betty and Ray Streeter of BRF Danes. Mikie then met Joel Rosenblatt, a very well known professional handler in Great Danes who has shown for over 40 years. Joel also taught Mikie on how to show Great Danes (2006-2009). Joel showed Mikie everything there was to know about showing a Great Dane and her goal is to become a top Dane handler in the country one day. Melissa Ayer (Bernese Mountain Dog & Lab Breeder) always helps Mikie and John Mark when needed for advice, questions, and prime mentor.

Many other handlers, breeders and professional handlers have taken the time to critique and help them when needed help. Such as, Pat Ciampa, Karen Pacino, Naida Parker, Rick Zahorchak and several others.

* Make sure to look for The "Dream Team" in the Breed ring! If you need any assistance ringside, we will be more then happy to help!